September 23, 2016September 23, 2016
While I am half Mexican, half Polish, I was raised  by some incredibly vivacious Latinas.  And despite the fact that I do not speak Spanish (yes I know it’s a travesty, but I did take Spanish class every year from elementary through my sophomore year of college if that counts for anything) I grew up with what I would like to call Independent/Traditional Mexicanas.  A bit coconutty, as they were Air Force brats who all look caucasian, they all had that Latina flare, but with a sense of world view since they traveled all over the world.  I learned so much from my great grandmother, grandmother, mama, and my two aunts.  Looking back I can see how these women shaped my entire outlook.  It’s still a bit confusing now that I think about it, I can only explain it as being trapped between two worlds; holding strong feminist ideals, but coated with hardcore Latino traditions.  Let me explain… 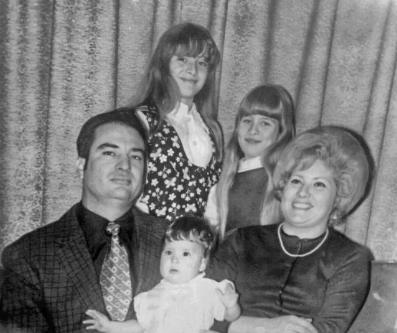 Grandpa, Grandma, Mama (the eldest), and my two Aunts

I grew up as an only child with a single mom and three generations of women who had been through lifetimes of experience.  I was the only grandchild/niece for nine years, the only thing I could do was watch and learn from these five different women.  I watched and listened to their lives unfolding.  I feel as though they poured all of their knowledge into me, whether they knew it at the time, or not.  I watched them – all of them.  From the youngest auntie to the matriarch, my great grandmother.  I watched them find love, marry young, put on their makeup, struggle with their weight, cry through marital and life’s struggles, travel across the globe for love, pray, make more tortillas than I could ever count, work really hard, have babies, ride horses, grow old, dance with joy, serve their husbands, manage their households, and even struggle to maintain their Latina roots in a white world.  I learned how to be a woman from five different women ranging from their nineties to their early thirties. I didn’t have anyone to share their crazy with – it was just me taking it all in and most of the time being really confused.

They taught me to pay my own bills, use power tools, dress like a diva, to take conservative risks, to work my ass off “Because you need to be macha! You don’t need to rely on a man, learn to do it yourself.  Don’t be lazy! You make your own way and no one can tell you how to live, now go heat up tortillas for grandpa,” to get educated, to have a voice, to travel and of course I learned that a clean house was incredibly important, along with heating tortillas, and making dinner (which by the way I refused to learn because no one was going to tell me what to do.)

I could never understand how such “macha” women would end up doing everything in their marriages – cook, clean, be obedient wives, take care of their kids, work, run errands and somehow always look fabulous.  Don’t get me wrong – they all have this amazing fire about them, and boy can that fire turn into wild fire rather quickly, but no matter how mad they could be at their husbands, they still did everything! It was a paradox of feminism and keeping up with the what I thought were bizarre traditional expectations.  So like all head strong girls I said I would never get married because I just wanted to live for me.  I noticed they all lived for their husbands and children, and at the time, I did not understand this.  Amazingly the women in my family didn’t push me to get married, have babies, or to be someone I wasn’t.  They let me be me – because they understood and rejoiced in my freedom.

Until I met my Mexican Mr. Darcy… then it started.

Despite my intense love for my Mexi-Darcy, I still believed a marriage should be 50/50.  I was NOT going to be the one making dinner, serving, washing, cleaning, and being the macha of the marriage.  And then it happened.  As soon as Darcy asked for my step dad and mama’s hand in marriage – the comments started… and it started with the men in the family first.

My very Mexican step father said, “You know, once you buy the cow, there’s no returns.” and my grandfather (whom I love as my father and respect with all my heart) sat down and told me to “be subservient, that is a wife’s role.  To listen and let him be the head of his household.” I understood where he was coming from and respected him, but I felt like I was going to vomit.  I was a modern chick – this was not how it’s supposed to be right? I could feel the anger begin to boil and felt my grandmother’s machisma start to rise within me!   I. DONT. THINK. SO!

I ignored all of this because in perfect fashion my Mexi-Darcy was as modern as me.  We went into our marriage understanding we would take care of each other and do away with the old school traditions of subservient behavior (even though I think sometimes he wished I was a little more demure).   And we did, but Lord help us, after the wedding the comments just kept coming from all sides of our families.

“Aren’t you going to get up and serve him? Wow… he has to serve him self… mija?”

“I would never do that, your husband should do those things.”

“Where are the tortillas? You know he needs tortillas right?”

“Wait – he went grocery shopping?  He works so hard, you should be doing that.”

“Why aren’t you cooking? Poor Chris has to do all the cooking.”

“You shouldn’t be so loud. He should make the decisions.”

The struggle it took to not say a word… After we said “I do” it seemed I needed to be two people; the modern working macha woman and the traditional wife.  Navigating my way through this felt awkward at times, nit because of Mr. Darcy’s expectations, but everyone else’s.  He loved me just as a I was and we were in this marriage together, but I still heard the voices of all those women in my head.

I tried it for a little bit and felt as though I was losing myself.  And then it hit me… everyone loses themselves in their marriage.  They become someone different because of traditions, comments, expectations, experience, time and struggle.  Marriage changes people.  I look back at all of the women in our families and realized – it all started because they wanted to please, and pleasing became spoiling, and spoiling became an expectation, then the expectation turned into a learned tradition of behavior.  They lost themselves in pleasing.  While I’m all for pleasure on both sides of the marital coin,  I don’t want anyone to truly lose themselves to being a servant.

I had to stop and remember the core of what I witnessed growing up and make it my own modern version, with my modern Mexican husband.  We still hold to certain traditions, but they’re OUR traditions.  I do the laundry because he hates doing the laundry.  He cooks because I HATE COOKING!  I clean because I love a clean house (I can hear the women in my family are rejoicing) and I only use my macha voice when it’s absolutely necessary.  And by God I love using power tools!

As a fourth generation woman in my family and the eldest of all of the little cousins I want to take the best of each of the women who raised me and give it to my daughter.  And there is so much beauty from those five women to share that will last for generations to come.  I love you family.

MexiMoments – Importance of Learning the Language as a Child – Thursday, 9/15

The Optimistic Heathen – Sharing Our Heritage with the Kids – Wednesday, 9/21

Modern Tejana – How to Live Your Latinidad in Mixed-Race Families – Thursday, 9/22

Haute in Texas – Mothering Latinas When You’re Not a Latina – Monday, 10/10

4 thoughts on “Navigating the Pressures of Traditional Esposa Expectations”