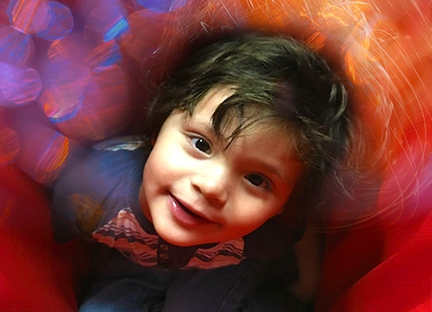 He’s three and has had double as many assessments than birthdays, holidays, and years on this earth. They started when he first failed a milestone survey at 2 and half and his Early Head Start teacher asked me to meet with ECI. At that point, I realized I was caught. A dirty liar. I may have imagined the milestones he was expected to have completed while I hurriedly filled out the same surveys in the waiting room of my doctors office; “I think he imitated my line drawing,” “Sure he can alternate his feet while climbing steps. Some times. Once?”  I thought to myself. I guess I thought those forms were more of a testament of me as a mother than how my child was truly performing and interacting with the world. Six “tests” to determine whether or not my kid is normal. Two for ECI, one for the Autism Community Network (which was part 1 of 2), two more for therapy services, and most recently, a big one, his School District’s Special Education Assessment with a Licensed School Psychologist and Special Education Specialist.

Over the summer, as we spent our days together the cosmic bubble that consumed him, the one he’d allow me to enter every once in awhile, the one we’d have to step into to see the world through his eyes faded into something a little more transparent. He began to see us, interact with us. During our time together, a new school year began and so, we met with our local school district to get a Special Education evaluation.

Our intake portion of the assessment was about an inch short of a disaster. I had paperwork to submit and review with the very sweet, very patient Special Education Director. But Max didn’t care. We got in the room and he had an instant meltdown. Which included throwing himself against the large window (it didn’t break), throwing a stapler, disconnecting a phone, a computer…basically destroying anything he could get his hands on then running to the door. So there I am, trying to hold a very serious and super informative conversation while the Tazmanian Devil tore through the room. As I sat and listened, responded, and tried to take in what she was telling me about my rights as a parents through this process the tears welled up in my eyes and I choked back the strong urge to cry and give a little scream.

I thanked the staff for their time and patience, clutched my son’s hand very tightly and all but dragged him into the truck outside. I buckled him in and threw myself into my seat where I proceeded to sob in the parking lot while he sat quiet strapped in staring off into the sky.

After the defeat of that day, I planned better for the next time we’d return to the school for the big assessment. I asked my Esposo to take the day off work, I packed snacks and a change of clothes, coloring books, and anything else that made me feel “prepared.”

I didn’t need any of it.

He did very well. He needed some redirection but showed off his new words, his ability to stay focused for longer periods of time, and just his overall awesomeness to both assessors. Who each, at one point, gushed about how handsome and/or cute he is. (Swoon!)

After about two hours of “tests” which looked a lot more like guided play time, several in depth questions for me and Dad, the School Psychologist came back with what we’d been waiting to hear.

She laid down his scores, and there it was, above the threshold for “Severe Symptoms of Autism Spectrum Disorder.” 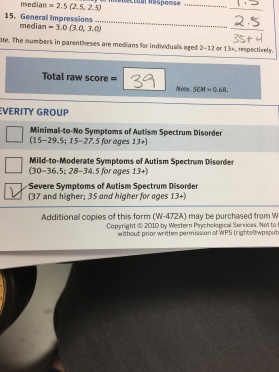 I couldn’t get past that first word “Severe.”

Surely, my bright adorable kiddo who doesn’t flap his hands, or rock back and forth is not “severe”. I scanned over the different categories and could no longer lie to myself as I did in my pediatrician’s waiting room.

This is what we came here for.

This is who he is.

I took a breath. It came out deeper than I expected and a rush of relief came over me. “Finally.” I said. “We’re not crazy.” They handed me a tissue as I nervously laughed and caught my husbands eyes across the mini table. We felt vindicated. We felt relieved. We felt nervous. We felt proud. No one could say “estas loca mi’ja” or “no seas exagerada!” anymore. Not when it came to this, anyway.

Non Categorical Early Childhood Autism Spectrum Disorder. It’s official. Like, on a paper with a professional’s signature and everything.

10 months of waiting. It felt much longer. But it’s nice not to be in limbo. It’s nice to be able to understand that what my kid is living with has a name. An OFFICIAL name.

He’s also officially  using the most amount of words he’s ever used, putting sentences together, learning to be soft with baby sis, can walk into a crowded room sans-meltdown (most of the time). He’s officially moved on from Buzz Lightyear and Trains are his new jam.

And so we are OFFICIALLY ready for this journey. And we hope our friends and family are too, because we’re recruiting for Maximus The Great’s Army of Advocacy. 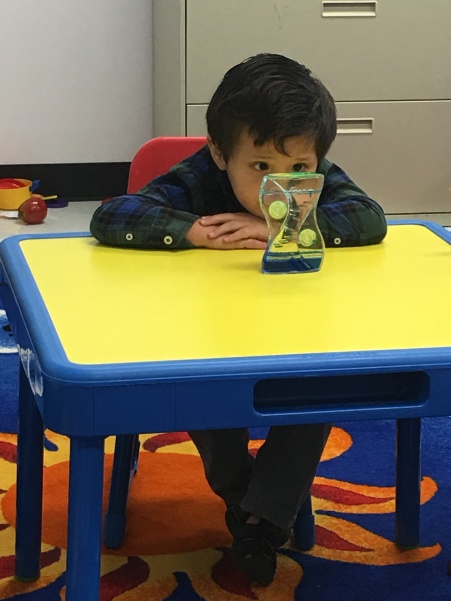 This process was a bit tough to navigate so I plan on advocating and spreading education for those families who may not know where to turn or what to do if they expect their little one may the on the Spectrum. Stay tuned for more info and share this with a family member of friend going through it as well. There’s power in numbers!

One thought on “Maximus The Great: It’s Official.”