I am a 2nd generation Latina. Well, 1 and a half if you want to get really technical. My father was born in the U.S. and my mom was born in Mexico. 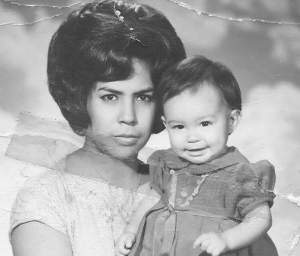 My Abuelita and my mom. Taken in Juarez…that hair, though

My dad’s family eventually moved back to Mexico. But it was a border town, and he attended school in the U.S., and my mom came to the U.S. when she was 15, and her Dad was American, so if you carry the 3 tortas, and subtract 1 molcajete then that makes me 1.5 generation Latina…but we’ll say 2nd to save time and spare confusion 😉

My first language was Spanish, as is the first language for all infants in my family. However, again, to get technical, I spoke both. My maternal grandfather was Anglo, and he and my grandmother created their own version of Spanglish to communicate with one another. I spent my first years in their care while my parents worked. 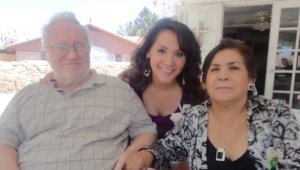 My grandparents were truly my 2nd set of parents

Once I was old enough to begin potty training, my parents were starting to speak more English in the home. My brothers were going to American schools, and it would only benefit me so I wouldn’t fall behind in language and risk being held back. I picked it up very fast. So fast in fact, I forgot Spanish.  Not entirely, but enough to where I would mix up words, conjugations, etc. In fact, as embarrassed as I am to admit it, I sometimes still do.

Then we moved to Dallas, where Spanish was heard even less. And although were were speaking it more in the home after realizing it was starting to become extinct, we still lacked the everyday conversational Spanish which mandated us to use correct and proper terms and not a forgivable Spanglish term here and there we’d use entre familia. My siblings and I would speak in English when discussing school because it required less thought and we could get our points out faster. And in a home with 3 teenagers, proving you were right faster than the other was essential for survival and bragging rights.

We were raised to speak Spanish among our elders who only slightly understood English, and to translate for someone in the room/group who did not understand the language (if an American friend, we’d translate Spanish to English, if my grandmother, vice versa).  This was very important and stressed for my siblings and I as we were the only ones in our family who left the border. Everyone back in El Paso spoke Spanish fluently and were surrounded by it daily, so they didn’t need to “hold on” to the language as we did. Or understand both perfectly. If they got an English word wrong, or substituted it for a Spanish word, everything would be normal. If we did that in the DFW? We’d get some serious side eye, or sternly told to speak English only, unless we were on Jefferson St.

Now that we, as a family, have gotten older, brothers, cousins and the like have grown up and into this American world my parents once knew as foreign, I can hear us using less and less Spanish. I hear “grandma” instead of Abuelita, the accents in my cousins’ names are no longer pronounced and I see the confusion in my children’s faces when we go visit family and everyone’s speaking Spanish a bit faster than they’re used to. And here lies my problem: am I a degenerate for speaking to my children in English?

As infants, my boys (and now, my daughter) heard Spanish lullabies. I had to research and re-learn English songs such as twinkle twinkle, and Old McDonald, whereas “Tengo Una Vaca Lechera” and “3 Elefantes” were ingrained in my brain. But now that they attend Head start and are sticking to an English curriculum, I am speaking to them more in English so they maintain consistency. But what about their cultura? I usually say something in English and repeat it in Spanish, or vice versa, but dang….ain’t nobody got time for that when I’m trying to get my 3 year old’s pants on, and makine sure the 2 year old doesn’t play with the toilet water!

This is harder than I imagined it would be. I grew up choking on cooked chiles, on the sound of loud rancheras, salsa, and cumbias on Saturday mornings, on knowing that Vicks Vapor Rub cured EVERYTHING. My kids have yet to smell any kind of pepper smoking on el Comal (I don’t even own a Comal), on Saturdays they hear a mix of rock, R&B, rap, Spice Girls and Salsa/Cumbias when Mommy cleans, and Honest Company eucalyptus rub is what I rub on chests and feet,aches and pains and I find other random Pinterest cures for sick babies. How do I give my children a genuine American upbringing whilst genuinely maintaining their raizes in their Mexican-American culture? What will happen when my cousins meet and marry Americans? Folks who have no relation to Latin America whether they be Asian, African, European, etc. What will happen to our traditions and languages? How will we incorporate who we are, with who my nieces and nephews will be?

I don’t want to force it down their throats, I want it to be a part of them just their names are a part of they are. But I don’t want it to be forgotten or washed over. And this, this struggle to maintain a genuine connection with what was and with where we and our children are today in this country we call home is, I feel, a result of us as Mexican-Americans never really belonging anywhere. Too Americans for Mexico, too Mexican for America. We forged our way into the American spectrum and landscape, but what now? But what for our children? Does blending and basquing in this melting pot of America mean our culture becomes swirled into something it’s not (I’m looking at you, appropriation)? Or is it up to us, 1st 2nd and even 3rd generationers to maintain the life, lessons, and richness of our ancestors and forge a way to blend the two (or three or four) cultures together to make a new way. 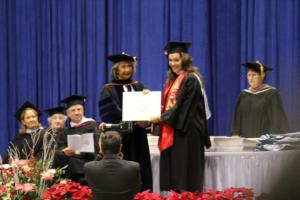 my grandparents came to the U.S. so their kids and grandkids could do this.

We still got some work ahead of us I guess. Much like Parenting, there is no Latino handbook.