Like many mothers out there, soy adicta to Target. Like a moth to the flame, the red sign hypnotizes me and I go way WAY over budget.

As you know, unless you’ve been living under a pierda, Target has come under fire for doing away with labeling their toys section by gender. Some say that labeling is normal and healthy in order for children to understand their identity. Others are pushing that “gay agenda” talk. But mostly, people are just uncomfortable and don’t like change.

If there’s anything I’ve learned as a parent it’s that kids are smart. Smarter than you think. Smarter than we as a society give them credit for. I have not tried to push anything on my kids except maybe naps, because they have always let ME know what they’re interested in. It’s my job as their madre to expose them to things like cultures, experiences, sports, arts, etc. and it’s their job to identify what means something to them and whether or not they like it. Within reason, of course. Much like when they learn to walk, you hover around them, watching them to ensure they don’t fall and bump their heads too hard, but you know that they have to be the ones who move their legs, and get going. Be there to guide your kids should they move or fall into a place where they hurt themselves or others, but you have to let them figure it out. 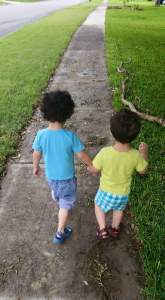 10.5 months apart. They share everything, but are still coming into their own

Last night, my kiddos proved me right. Let’s be real, I’m a Latina, I’m always right! Haha, but seriously, my sons showed me that children are not just mindless little humans whose cerebros have to be molded by adult hands 24/7.

After a busy day, I picked up McDonald’s for dinner (please save the “your poisoning your kids” lectures. McDonald’s meals rarely to never happen around here, but this momma was alone with 3 babies and busy!).

Upon ordering Happy Meals I was prompted the “boy or girl” question. I replied “it doesn’t matter,” and when I got home I noticed the toys in their bags were busts of a Monster High character with a hot pink top, and black and pink pigtails. She came with a completely nude face and stickers of eyes, mouths, necklaces and other accessories for the kids to place on her.  As I opened these toys and laid them on the boys’ table they each had a different reaction:

My son “Ocho” who is a sensitive soul, looked kind of confused but was excited to play with stickers. He placed 2 upside down eyes on the doll, grabbed her by her ponytails and tossed her around and laughed, then walked away from the toy.

I’m blaming the upside down eyes on his creativity

My other son Max, who is a walking, talking, playing container of testosterone-a boy’s boy-took one look at this pink thing, looked at me looked back at at shook his head and said “NO! NO!” and proceeded to pick up his Buzz Lightyear doll and watched Monsters University.

They each made up their own minds about what they did/didn’t want to play with, and how to play with it. I didn’t have to do that for them.  I laughed and was a little surprised Max didn’t even try to enjoy his toy, but I sure didn’t try to force it on him either. I may want to progressive and delete gender roles from my house, but not at the expense of my son’s happiness.

Again, children are smarter than we think. In many ways, they end up raising us. So taking away a boy/girl sign in the aisles of Target will not make a child confused. An overreaction and tantrum by an adult about what is or isn’t “right” will do that.

Let them choose. Let them play. Let them be innocent for as long as it takes. Most importantly, let them think for themselves…before it’s illegal 😉