I will fully admit, I can be messy. Not dirty, but messy-there is a difference. Like, my clothes may be piled up everywhere on the closet, bathroom, and bedroom floors, but my bed? Hunty, it will be on point. My Madre would be so proud.

After I had a girls day out one day, I came home to this. But for a while, this was the norm in my house (I know, I’m changing my ways)

A typical morning in high school consisted of me gathering my books, change of clothes for practice, makeup bag, and whatever other item I felt was necessary to survive in the halls of my high school. I’d kiss my parents goodbye, make my way to the door, and hear “Tendiste la cama, Janeli?” [Did you make your bed, Janeli?] I would either, lie and say I did, say I’ll do it later, or if I knew I hadn’t made it and she had that questioning look in her eye, I’d basically just run out the door and play dumb like I didn’t hear her. My mom always wanted our beds made. And I would do it about 40-50% of the time…which in a Mexican household probably makes me a juvenile delinquent. But my grades and extra curriculars made up for it. As I went off to college, then married my college sweetheart, the not so formed habit, was completely absent from my life.

Cut to a few years later, when I had cable television, children, and a slow moving freelance career I would often watch OWN, Oprah’s network with a semi wide spectrum of shows, all appealing to women trying to find out what it all means. Women like me, mostly. I remember watching her sit down with Starbucks founder and CEO Howard Schultz and discussing the importance of morning routines. Because these two larger than life self-made cagillionaires were talking about them, I acquired (and still do) morning routines with being tremendously successful. As I thought about my mornings, I sat in silence trying to find something routine about my mornings…and I got nothing. Some days I woke up before the kids did, other (OK, most) days I awoke to the sounds of cranky toddlers. Some days, I woke up and made myself and the hubby something to drink, but most days, I was too tired to wake up in time to get myself ready for work.

So I said, I’m gonna find a routine and stick to it. Then, I got pregnant, broke my ankle leaving me bed ridden for weeks, and when I able to use crutches, just getting in and out of bed, dressed and ready for work was enough work in and of itself, that routine promise I made went into the trash along with many other plans I had prior to the pregnant/broken ankle debacle.

I’m learning that for now, between 3 children in diapers, my esposo, work and everything else, a “morning routine” will have to established at a later date. But what I AM doing each morning, not just to pave the road to my success, but in order to actually live each day, is make my bed. Yes. I equated me living with whether or not my bed is made.

It doesn’t even have to be perfectly made. I’ll allow myself a few wrinkles in the sheets, so long as the comforter is pulled over the sheets and the pillows are sitting up, make it that much more difficult to crawl back into bed, and merely exist.

My depression would like me to do exactly that. Crawl back into bed, and not.move.a muscle.

At least, with my bed made, I can get dressed-even if it’s in yoga pants, as working from home allows such a laid back uniform-and continue to move. I must stick with Newton’s theory of an object in motion, will stay in motion. But it’s a battle. Each day I have the heavy armor of depression on underneath my cute outfit. Each step you see me take, is truly a step uphill. Pushing through the depressing thoughts and voices which continuously tell me lies about how worthless, meaningless, and awful my life is. Each hour of sleep I’ve obtained is a victory, because it means that the babies have managed to stay in bed, and I’ve managed to drown those same thoughts and voices out, for some very much needed rest.

But I am CONSTANTLY tired. Because the tread up this hill, this large and daunting imaginary hill is exhausting. Fighting every desire I have to lay back down in the bed, fighting the dark cloud that looms over me, the dark fluffy yet heavy robe that consumes me just like that antidepressant commercial is ex-haus-ting. 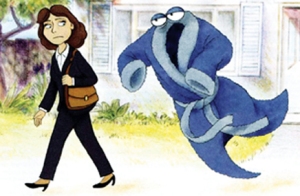 This Ambilify commercial depicts it so well

And when someone who’s opinion actually matters to me like my mom or husband ask “why are you so tired?” I get shoved down that hill and have to work to bring myself back up again. Because I can’t just say, “Oh, cause I’m sad.” Depression doesn’t work that way. (And frankly, what Mexican mom is gonna let you get away with THAT excuse? (But the situation feels like is a huge rain cloud pouring gallons of rain on my head all day, and they ask “why are you wet?”)

I have NO fucking reason to be sad. I have 3 amazing children. I have an AMAZING husband/coparent. I took the reigns of my life and made a ballsy career move to which I should be proud, and my family is awesome. So WHY am I depressed? Gah! It’s so simple, yet so complicated all at once. And that in turn, makes me more depressed. Ya happy, Depression? You win again, bitch.

But not any more,actually. Cause each morning I wake up and pull the covers over the mattress, I’m giving the imaginary finger to this imaginary hill, and in fact make it smaller, and smaller.

So even if I can spend a day in lounging in my soft IKEA cama [bed], I’m going to tenderlo [make it]. Because if I can escape the trenches of depression for just one more day, I will. My family deserved that, and I do too. Plus, I’m a MexiCAN-AmeriCAN….no “can’ts” allowed.